The Imitation Game (of Sound) 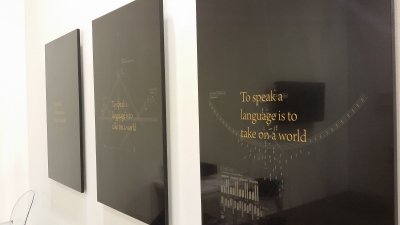 He doesn’t have a rank in military but has invented weapons and formulated military scheme of maneuver. His contribution in safeguarding his homeland is undeniable. He was not born in Alan Turing’s time, but thirty odd years after World War II. His name is Samson Young.

His recent series Pastoral Music was under the limelight at Art Basel Hong Kong, not exactly because of being shortlisted in an award but his tantalizing live performance rather. A drum, a pistol, a shaver, some cornflakes and stones on a panel occupying the centre of the booth stole the show, despite being mistaken by many as installation.Nocturne is a sound performance playing against scenes of night bombing with live-foley techniques, i.e. sound mixing in filmmaking. Samson, dressed in army green, was so concentrated in firing bombs and operating aircrafts literally on his fingertips – tapping the contact microphone on the drum, hitting the plastic box with cornflakes underneath, moving the shaver around, shedding soil and tea leaves, etc. His undisturbed face made me believe soldiers could be equally calm at killings. The sound broadcasting via FM radio was a bit too real as seen on the news, not in movies. “Sound from movies is far more artificial; I made reference to sound archive of wars.” Samson explained. Just by listening to the radio, viewers become witnesses of mock bombing.

To serve the purpose to be collected in Art Basel, Nocturne featured a video documentation. A filmmaker from mainland China expressed his disappointment when he found an empty chair behind the panel, “There was no way the audience could appreciate the process of how the sound was made. The set here is an outcome, and the video couldn’t help much. The value lies in art-making.” While a doubtful visitor questioned the value of art, “What’s the value of doing this? It isn’t the artist who invented live-foley techniques, but he’s just copying.” He viewed art as creation, but not imitation. The placement of the news footage emphasised that the produced sound was illusionistic, so it was the artist’s intent to represent the audio nature of war as an imitator.

By now, if you think the artist is pro-war, think again. An anti-war visitor refused to listen to the radio after knowing the works were about war. Quoted from the material prepared by the artist, artists’ involvement in warfare is not uncommon.

American “23rd Headquarters Special Troops” during the Second World War [was] a special troop of musicians & sound artists recorded the sounds of tanks and infantry units, and played them back into the battlefield to create “phony armies” that could be heard from up to 15 miles away.

Thanks to the phony armies, no civilian was killed, nor the enemy. In Pastoral Music I, Samson created “weapons” in the form of sound composition and sets of accompanying musical scores. Trained in music composition, he painted an orchestra-like piece with different sound layers such as rifle/ pistol, artillery and footstep. Sounds like AAAA and PANG were depicted visually in a quiet and still manner, casting a contrast with desperate screams and continuous firing that led to a mental picture of men were down and never home. With the sound composition, visitors were prompted to follow the timeline on the painting so to verify the next happening – as if they were the strategic masterminds behind this battle. A set of four small paintings illustrated the sound of weapons, in form of graphical notation as well as its visual effect. These “sonic weapons” were available for sale, so was it sort of arms trafficking disguised in art?

In the beginning, I acknowledged Samson’s contribution in protecting Hong Kong from invasion. It was because of his state-of-the-art military scheme of maneuver presented in Pastoral Music (But It Is Entirely Hollow). Gin Drinkers Line was built by the British army in 1940s to defend against invasion to the Kowloon Peninsula; however, history reminded us of its failure. Samson visited there, humming a song along the way. A visitor was obsessed with the deep tone resonating inside the passage that she had to close her eyes to stay focus. “Beautiful! I can hear it. It’s beautiful,” she uttered. The fair full of visually exciting works would tire one’s visions; shifting our focus to auditory sense would be a nice surprise.

Getting out of the historical passage, “General-in-chief” Young thus did justice to the line of defense and formulated a set of military scheme in his language – music, which was engraved on three pieces of granite. Italian terms in music visualised the vibe, for example, grave and moderato for the tempo of feigned withdrawal, fortissississimo (ffff) for the dynamic of counter attack, spirito for the mood of flank attack. Amid praises and appreciations from visitors, I could not help but think of the assumption. What force would it most likely be that invades Hong Kong from the north soon? The work did not give a straightforward answer but the phrase “To speak a language is to take on a world” inlaid in golden ink has dropped a hint: we shall contemplate a defense strategy in our own language that share among the comrades in case we are in danger.

While Alan Turing broke the German codes with his mathematician’s mind, Samson Young is an encoder in musical language. By investigating how artists involve in warfare, Pastoral Music inspires us to question the function of art – aesthetic vs social vs political roles. From imitating bombing sound to strategising a defense, he has deployed radio transmission to elevate the audio component closer to a war context yet playfully hook the audience. An attentive visitor realised that transmitting via FM should be licensed, but hopefully this crime would be pardoned in the name of art (and best of luck the merit of the Art Basel award).